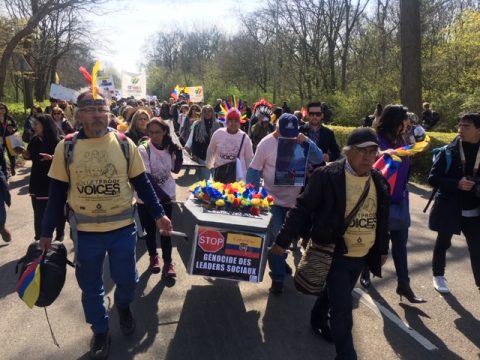 ‘No more war! No more murdering!’ On this sunny April afternoon, hundreds of Colombians have gathered in front of the Colombian embassy in The Hague. They are marching to the International Court, to demand justice for the numerous Colombian human rights defenders that were murdered in recent years. Estimates are that the number of murdered human rights defenders since 2002 ads up to an astounding 825.

A seemingly endless black sheet, with in white stating the names of the deceased, is carried at the centre of the march. María, a Colombian living in Paris, is holding on to this death list with one hand, while in the other she holds a sign that states a number of demands. “First of all, we want justice for all the people killed”, María explains. “But today is about more than that: we also want a generally safer environment for our country’s most vulnerable groups, such as indigenous and afro-descending peoples or female leaders.” 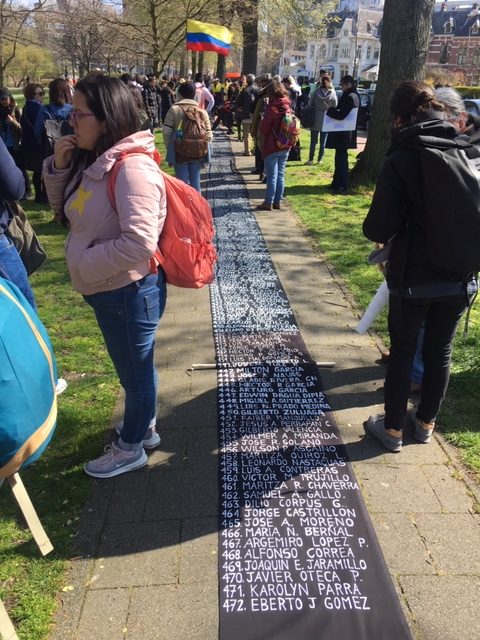 Especially these groups are most affected by the violence. Most murders are a result of conflicts revolving around land – and the natural riches it holds – usually inhabited by these vulnerable parts of the population. Because of this, María thinks landowners and large companies are behind the murders, to push their extractivist agendas. On top of that, a widely shared belief among the people present at the march is that even the state plays an active role in the increased violence.

Milton Puertas, a Colombian living in The Hague, is a member of Diplomacia Ciudadana, one of the promoting forces behind the march. He shares the idea that the state has its share in the violence.  “The state refuses to take a stand against the murders”, Milton says. “This is a direct threat to Colombian democracy. The murdered social leaders not only defended the interests of marginalized and oppressed parts of the population, they also represented an alternative voice to hegemonic power. The existence of such voices is at the core of democracy.” 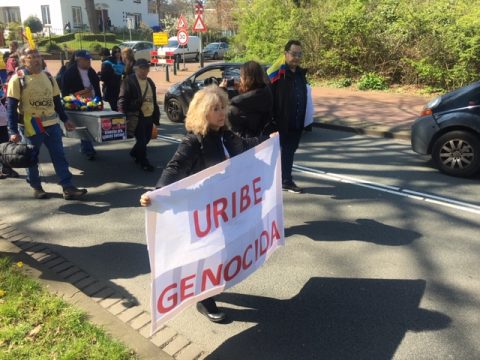 Therefore, today’s march serves several purposes. “First, we ask the International Court to acknowledge this situation and end the impunity. But just as important is that the aggressors get caught, that we build up profiles of the murderers and sentence them, so that no more violence will occur.”

That peace will not come at the cost of life

Since the Peace Agreement with the FARC-EP, paradoxically the number of murdered human rights defenders has heavily increased. The right-wing government of Colombia has yet to take institutional measurements to actually achieve the agenda of the Peace Agreement, but the political willingness to do so is simply lacking. Additionally, the government denied the possibility of finding peace alternatives with armed groups other than the FARC-EP, such as the ELN.

This governmental approach to the Peace Agreement has given way to a complex situation in the areas where conflicts were heavier. With the state largely absent, and some of the armed groups following the terms of the agreement by leaving the area, other (armed) groups have taken advantage and seized power. In this context, the more vulnerable societal groups are still threatened by violence, as the murdering of the human rights defenders painfully shows. Achieving peace in these areas still seems far away. 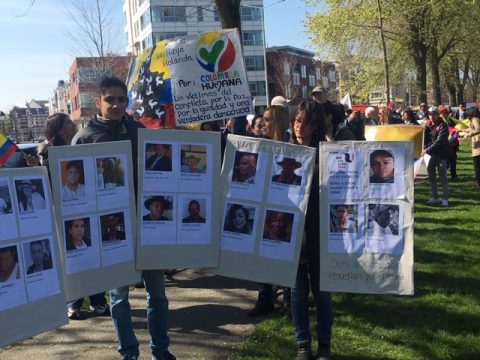 Meanwhile, the Colombians in The Hague have reached the International Court. As one, they start shouting one of their most powerful chants: ‘Que la paz no nos cueste la vida‘! That peace doesn’t cost them their lives.